Pornographer Tobi Hill Meyer recently penned an article for Bilerico regarding the failure of the R.J. Donovan Correctional Facility in California to house two men who think they are women in the same cell.  In the article, Tobi attrributes the failure of these two men to be housed together on “feminists.”

But, more importantly, who are the “trans women” currently Tumblr-supported by Gender Queers across the country?

One of the incarcerated men – Catarina LePre – is better known as Jason LaPre, a registered sex offender. 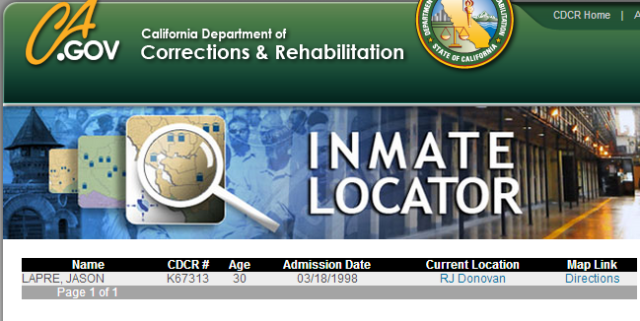 Why is Jason in prison? Well, you see, JASON RAPED AN 8-YEAR-OLD GIRL WHEN HE WAS 14.

The other incarcerated man – Michael Hernandez Contreras – was convicted of two counts of murder in 1982 and is serving a life sentence.

And the outrage here is that a convicted rapist of an 8-year-old girl and a double murderer aren’t housed in prison together?

And this is the fault of Feminists?

It might have occurred to an actual reporter that there might be another, more likely explanation as to why a prison wouldn’t house a pedophile and a double murderer together (if in fact it is actually true that inmates can choose who they are housed with).

Bilerico, you have no journalistic ethics. At all.

← Awww NGLTF Knows What A Woman Is, After All
Roseanne Stands for Women →
Join 3,014 other followers