What About the WOMEN?

Recently, a friend ran across a PowerPoint from 2009 entitled Transgender Inmates in California’s Prisons: An Empirical Study of a Vulnerable Population. The PowerPoint apparently summarizes a study that examined the significant problem of prison rape and the responsibility of prison officials under the Prison Rape Elimination Act to prevent it. No doubt, prison rape is a significant and troubling problem. No person deserves to be raped under any circumstance, and prison officials have a duty of care to ensure inmates in their custody are free from rape and other bodily harm.

Let me repeat this: No Feminist supports sexual assault of Men or Women who are incarcerated.

The PowerPoint is not particularly well done (I don’t know about the study itself), and I am not a statistician, but a few things stand out.

First, methodology.  Dr. Valerie Jenness, the Dean of the School of Social Ecology at UC Irvine and a Professor in the Departments of Criminology, Law and Society and Sociology, conducted the study, which does not seem particularly rigorous with regard to the determination of subject inclusion.  Jenness indicates that the study consisted of interviews with 315 inmates “Determined to be Transgender.” 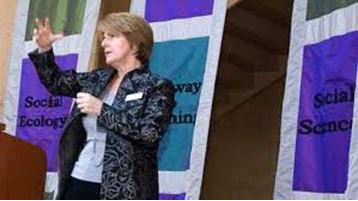 “Determined to be Transgender”?

The determination of transgender status apparently occurred by some process not described in the materials. Dr. Jenness  –  mayhaps – relied on the inmate’s self-identification, as there is, of course, no “objectivity” involved in determining “who is transgender.”

So what is Transgender?

Let’s see what the inmates Dr. Jenness interviewed have to say about what is Transgender, Gay and Homosexual!!

Gay boys: “men who have feminine characteristics. They don’t want to be girls. They are more like pretty boys, but they are boys.” Tellingly, his eyebrows were done like many tgs do their eyebrows. When I commented on this he said “oh, thank you, I try to keep them looking good.”

Transgenders: “they want to be the girls. They want hormones, they want boobs to look like girls. They tend to think they were born to be girls and they are always bottoms.”

Homosexuals: “just masculine men—they don’t want and they don’t have feminine characteristics. They are men men—like the Village People, you know that group”? I said yes and asked “what about sexually? “You wouldn’t know they were homosexual, they almost always tops, but you’ll find about 25% go both ways. Have you heard about gunslingers”?

So, apparently, the 315 men interviewed want to be women, want hormones and boobs “to look like girls” and are the “woman” in a sexual relationship with a man.

The PowerPoint helpfully includes random photographs of Men who believe they are Women. 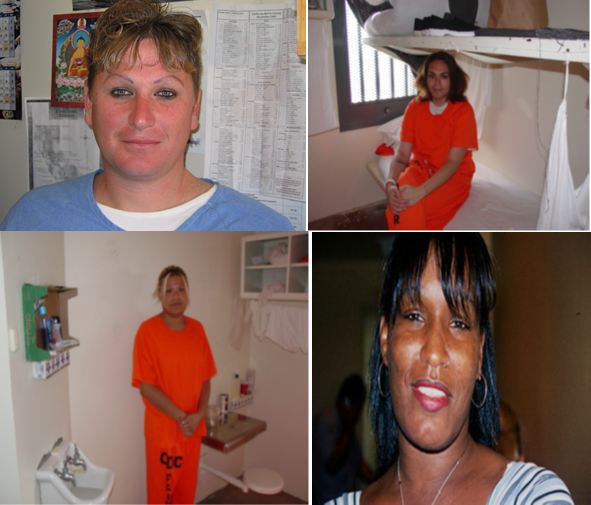 These are the Men who might file pro se lawsuits to get ‘mones in prison.

So, once we “clear the hurdle” of who falls into this magical, subjective box of “transgender,” we next come to the question of who ARE the transgender women in custody.

This is where things get “interesting.”

According to Dr. Jenness,  almost half of these Men are incarcerated for crimes “against a person.” That is, these Men somehow raped, assaulted, killed or otherwise harmed a person. And 20% are registered sex offenders. 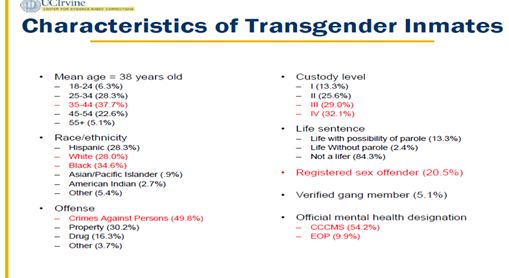 These statistics are not terribly surprising. After all, Bad Men Go To Prison. So, it’s not shocking that the Men who believe they are Women would have done “Bad Things” in order to end up in the joint.

Dr. Jenness collects this data, it seems, for data collection’s sake, as she doesn’t seem to make any comment on this. Indeed, the thrust of this study is to provide proof that Transgender inmates are more likely to be sexually assaulted in prison.

Of course, this “data,” wherever it comes from, also suggests that Transgender inmates are more likely to engage in sexual “misconduct.”

But, as we know, policy makers DO NOT REMEMBER THAT TRANSWOMEN ARE, IN FACT, MEN.

The part of this study that bothers me, and that bothers many of us who have been keeping up with the Robert Kosilek case, is the complete lack of conversation, analysis, concern and care about how housing Men who think they are Women in a Women’s prison will negatively impact, well, WOMEN.

Half of the participants in this miniscule study committed some crime of violence against a person (hai! Women are Persons) and 20% of them are registered sex offenders.

And we want to put Violent Men in prison with Women?

Why are incarcerated Women, in custody, unable to protect themselves, so easily dismissed in this analysis? Why is it “ok” for Gay Organizations and Well-Meaning Liberals to hand wave away the concerns of Women?

Incarcerated Women are raped in Prison. By Men.

Transgender Women are, in fact, Men.

It’s not just me saying this.

Let’s see what Dr. Jenness’ subjects have to say! 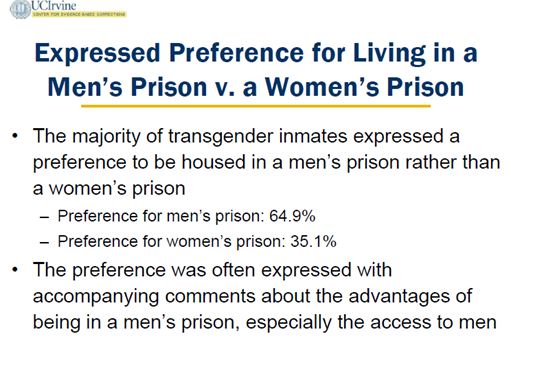 By the way, CeCe McDonald, probably the most famous Transgender Women currently incarcerated, wants to be housed in a Men’s prison. Because CeCe, unlike the dumb liberals who demand that she be house in a Women’s prison, knows she is a Man who prefers the company of Men.

Should it really be up to how an inmate “feels” about being a “Man” or a “Woman” that dictates where Transgender Women should be housed? Should we prioritize the safety of Transgender Women over that of Women? Should it really depend on whether or not said inmate has had his womanly penis removed? Should it really depend on who the inmate feels more “comfortable” with? And, if these questions matter, why are academics and policymakers not asking these same questions of FEMALE inmates?

Is it because Women being Raped is “Normal,” both in and out of Prison?

Is it because Women being Raped is to be expected?

Is the duty to protect Women from rape in prison less important because the status of Women is to be Rape-able?

Jill Filipovic, who thinks Transgender Women Are Women, almost got this in a piece she wrote for the Guardian:

One overlap, though, between prison rape of men and non-prison rape of women is the way American society views both as an inevitability. That plays out in different ways, but there’s a sense that incarceration must naturally lead to rape (see, eg, “don’t drop the soap!” jokes), and that femaleness is inherently sexually tempting and therefore also leads to rape if you’re not vigilant about preventing it (see, eg, every rape prevention tactic that focuses on what women should or should not do – don’t walk home alone, don’t wear revealing clothing, etc).

Almost, but not quite.

What does it say of Incarcerated Women if we cannot even conceive that they can be raped in prison? Not even that it’s “inevitable,” but that it’s not even worth mentioning vis-à-vis the Transgender Question.

So much for Intersectionality, again. Despite the fact that Incarcerated Women are overwhelmingly poor and of color, we don’t care too much about them when there are Men Who Think They Are Women to be helped!

The analysis of addressing a problem – abuse of Transgender Women in prison – has thus far completely disregarded the harms that would accrue to Women if correctional officials house Trans Women with Women.

And there’s a reason for this.

And it starts with Misogyny.

And that Misogyny lives in all of us.

Why aren’t we listening to what they are saying? 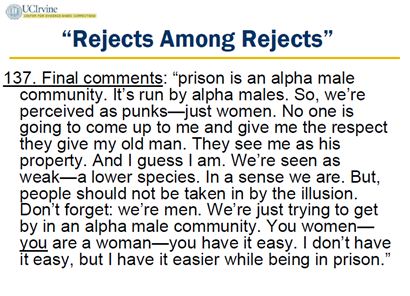 Oh, thanks. We know you are Men.

← Just Report Abuse, That Will Shut Women Up
Repeat a Lie Often Enough, It Becomes True →