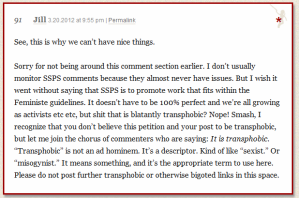 Jill – Why is it transphobic for Lesbians to have concerns over the so-called cotton ceiling theory? Lesbians are not barrier to be broken. I am appalled that you would characterize a petition calling out a BLATANTLY rapey concept as transphobic.
Best,
Cathy

← WTF is up with the Sherbourne Health Centre in Toronto?
Planned Parenthood Embraces Lesbophobia, Supports Workshop Framing Lesbians As a “Barrier” to be Overcome →