At Common Law, an intentional act by one person that creates an apprehension in another of an imminent harmful or offensive contact.

An assault is carried out by a threat of bodily harm coupled with an apparent, present ability to cause the harm. It is both a crime and a tort and, therefore, may result in either criminal or civil liability. Generally, the common law definition is the same in criminal and Tort Law. There is, however, an additional Criminal Law category of assault consisting of an attempted but unsuccessful Battery.

The following people assaulted me.

After the march had completed at Washington Square Park, my dear friend approached me saying that she wanted to talk to Cathy, who happened to be at the Dyke March, but wanted folks standing with her in solidarity so that Cathy would see that she wasn’t alone in feeling this way.

My initial reaction to Cathy when she greeted my friend was that, perhaps, she was going to sincerely apologize for the horrible things she had done, and truly have an open discussion. But the tone from Cathy changed, and my friend kept trying to speak up, only to be interrupted time and time and time again by Cathy Brennan and her ignorance. I couldn’t keep my mouth shut anymore.

I spoke up and, quite powerfully, told her to give my friend a voice, because trans women are always silenced. This was met with Cathy repeatedly interrupting me. I tried to start the conversation with a simple “Look, we’re both cis women, let’s level here”, but Cathy freaked out and insisted that she doesn’t identify that way. Being the person I am, I immediately apologized for misgendering her, not realizing that she meant that she actually doesn’t believe in the word “cisgender”. She asked if we could talk, we walked over to the edge of the park, and the group followed us. That’s where shit, as they say, hit the fan.

Cathy sat down on a bench, immediately asking if anyone would like to sit in her lap. When someone called her out for sexually harassing us, she dismissed us like we were too insensitive, that it was a joke. It definitely was her idea of a joke, but at the same time, she insists that trans women are “bullying” lesbians in to sleeping with them. The failing logic only escalated.

At this point, I can’t even recall all of exactly what was said, but it ended up being about a dozen folks being mostly silent while myself and another person were the folks that were mainly talking to her. She kept interrupting us when we had valid points to make, she deliberately misgendered the other person in the argument, she consistently played the victim while denying that she did anything to deserve having folks call her out. My favorite part was that, when I brought up the fact that trans women are dying every single day because folks like her perpetuate transphobia, she harped on the fact that women are killed all the time because of systematic oppression. I wasn’t arguing with her on that, but the point is this – nothing I have done or said has intentionally contributed to the bullying and harassment of a marginalized group. I most certainly have not written an open letter to her parents, condemning her for being a dyke, or any of the countless amount of things she’s done to bully trans women.

She continued to pile on hate-filled rant after hate-filled rant, to the point that, after I decided to leave before it escalated any worse than it already had, I went to my friends and immediately broke down, sobbing hysterically, dealing with a panic attack. If anyone was harassing anyone, it was Cathy Brennan and her delusional diatribes in which she invalidated the existence of the people I love, triggered several other people to the point of tears, and played the victim while doing it. Not to mention that she had her (ignorant, delusional) posse stand beside her, filming the entire thing with smug looks on their faces. If Cathy felt she were being harassed, she could have left, but instead, she continued stoking the fire so that she would get a rise out of us to show to her followers who have, without ANY details whatsoever, come to the conclusion that we are worse than religious activists, that we are horrible people, etc.

I lost my temper, I’m not going to skate around that. Folks who know me know that it takes a lot to get me truly angry. I blow off steam sometimes, but this was pure anger coming out of me, something I can’t ever remember feeling. I was angry because I am so tired of trans women not having voices in the feminist and queer communities.  I am tired of these women being shut down when they finally DO have the chance to speak. I am tired of people claiming to be feminists, then giving the movement a bad name, to the point where I can no longer feel comfortable identifying as such. I was tired of my dear friend, time after time, being told that her feelings were invalid in activist spaces. I felt that I, as an ally, had the responsibility of speaking up, and I did.

My trans sisters are dying every single day because people like Cathy Brennan foster such hatred and bigotry. So do I regret losing my temper? No. Am I sorry that she felt uncomfortable because she had to deal with a couple of trans folks and their allies calling her out on her bullshit? Hell no.

I’m not going to kiss anyone’s ass or apologize for losing my cool with someone so delusional, who treats my sisters like they are sub-human. You reap what you sow. 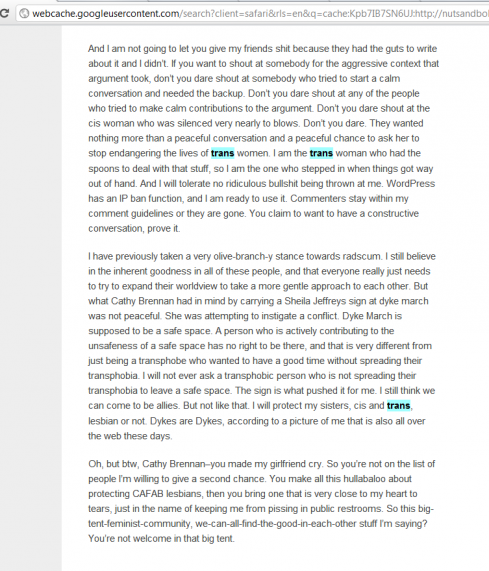