“Being a woman is not about spending thousands I agree, it is about conviction, courage and standing up to patriarchy and the glass ceiling. It is about finding Leda and the Swan disgusting and hating violations of womankind, or indeed mankind. But, transwomen have to work to attain what non trans women have from birth. For the record, I have never spent thousands, I don’t have it to spend.” 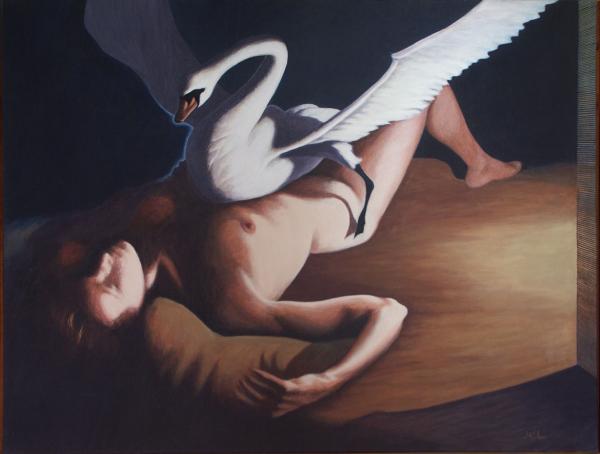 Do you find this disgusting? If so, you are a woman.

A news item from Fort Worth, Texas crossed my inbox recently.  Teresa Cross, a Transgender Woman, attempted to shop at a store.  When Teresa asked if she could use her debit card, the clerk stated that “he” could not. This act bothered Teresa because “she’s a Woman.”

Cross immediately corrected the employee, telling her that she’s a she, not a he. The employee said she wasn’t talking to Cross, but to the other employee. Cross said she told the employee that referring to her as a male was insulting and offered to show her documentation of her gender identity on her driver’s license. The employee then replied, “I call it like I see it.”

Cross, who said she has been presenting as a woman for seven years, has long hair and was dressed as a woman. She was wearing  makeup and a T-shirt with Capri pants. She said it was obvious she was a woman.

“I look like a woman. Why would she single me out and be so rude?” Cross said. “For them to be that rude to me just doesn’t make sense.”

What is Being A Woman? What is A Woman? What does she look like? This is an important question.  For Trans Women, this is THE question. Trans Women Are Women, they say. This means “See me and accept me as a Women. Don’t notice anything that makes you think I am a Man. Including the fact that I am actually a Man.” This fondest hope of (some) Trans Women also goes to the question of Passing. Does a Trans Woman “pass” as a (Real) Woman? That is, Trans Women and Women are indistinguishable from each other, and only a BIGOT would notice the difference (and say something).

This mind trick works fine in GLBTWTF and Liberal Communities. No one wants to hurt anyone’s feelings in these communities (as it turns out, neither do I! I know, shocking, right?) and these communities have consumed a heaping dose of EQUALITY (meaning everyone is the same, even when we are different), so STFU and accept everything without question – otherwise, you, observer using your eyes, are a bigot.

So, Teresa is angry and feels hurt and wants to sue – because someone (the mean clerk) needs to be taught a lesson. What are her legal claims?

Forth Worth bans discrimination based on Gender Expression – a person’s external characteristics and behaviors including, but not limited to, dress, grooming, mannerisms, speech patterns and social interactions that are socially identified with a particular gender (what what? Many commentators have talked about how this is garbage, including this one) and Gender Identity – a person’s innate, deeply felt sense of gender that may or may not correspond to the person’s body or sex listed on their original birth certificate (same garbage).  The law also defines transgender as “a person who experiences and/or expresses their gender differently from conventional or cultural expectations including, but not limited to those who express a gender that does not match the sex listed on their original birth certificate or who physically alter their sex.” The law doesn’t define Gender or Sex (surprise, surprise),  and a store is a “public accommodation” (as it should be).

The law prohibits the clerk at the store from discriminating against, withholding from or denying any person, because of “transgender, gender identity or gender  expression,” any of the “advantages, facilities or services” offered to the general public by a place of public accommodation.

So, if the clerk said, upon seeing Teresa, “Get out of here, you are a Trans Woman,” clearly, the store would be liable (and should be).  If the clerk discouraged Teresa from shopping there, without referencing Teresa’s status explicitly, liability could (and perhaps should, depending on facts) also ensue.

But that’s not what happened. What happened was the clerk “misgendered” Teresa, and Teresa got angry enough to tell another clerk that the misgendering clerk was a bigot. Upon seeing Teresa’s (angry) reaction, the second clerk kicked her out of the store (probably for reacting angrily or causing a disruption).

The store will have to establish facts that demonstrate that it had a legitimate, nondiscriminatory reason for asking Teresa to leave – does asking an angry person to leave your place of business cut it? It may. The Forth Worth Human Relations Division will sort that out (my guess is that this isn’t going to be a big money damages case, as someone being rude to you isn’t cause for a large cash settlement).

Now, back to the larger question of Being A Woman. I have been “misgendered” for most of my life. Most Women who look like me (you might call us Butch) have been “misgendered.” I have yet to meet (anecdote alert) a Woman ever call someone who “misgendered” her a bigot (I haven’t). What usually happens, at least in my experience, is this: I ignore it or smile and talk with my (Woman’s) voice, and the person (usually) gets embarrassed that he “misgendered” me. It’s quite simply not a big deal. It doesn’t erase me to be called he by others. It doesn’t make me not Female. It doesn’t make the observer (of me) a bigot simply for calling me Sir (there may be other subsequent facts that would lead to that conclusion, but let’s skip that for the moment). I suffer no injury from the act of misgendering (my hurt feelings are not an “injury”).

So back to Teresa.

“I look like a woman. Why would she single me out and be so rude?” Cross said. “For them to be that rude to me just doesn’t make sense.”

I am guessing if we could hear Teresa as the clerk did, we would agree with the clerk. I am surmising that Teresa does not look “like a Woman.” I am deducing that anyone with reasonable powers of observation would see Teresa as a Trans Woman (and again, I think the clerk was rude – but I don’t think her observation was incorrect). Sadly (perhaps), Trans Women, your desire to be perceived as Female does not override how the Regular World perceives you.  Your desire to “be a Woman” and have others “treat” you “like a Woman” is not subject to legal enforcement. You cannot legislate that Regular People see you “as a Woman” and respect you “as a Woman.”  Because you are not Women (and let’s put aside the whole topic of how are Women “respected as Women.” As far as I can tell, Women aren’t respected as Human. But I digress). All Trans Women can expect is not to be (irrationally) discriminated against. That’s a reasonable expectation.

But why settle for reasonable when you are a Trans Woman? Demand nothing less than 100% submission to your view of the world. How very (Male)/womanly! Especially when your Identity is wholly dependent on how others see you. I can understand how this mechanism of pain/injury works. Courts, human relations agencies and legislatures need to consider this, as the harm that comes from “misgendering” is not like any other “damage” seen in Discrimination cases – because it is based wholly on the failure of others to see the Trans Woman as she wants to be seen.

Anne Lawrence has written about narcissistic rage and injury in MTF Transsexuals.  Lawrence, herself an MTF Transsexual, is worth reading, for understanding how this feedback loop of demanding that others see reality as you do works.

1. The Trans Woman thinks she is a Woman because she feels “like a Woman.”

2. The world observes that She is not a Woman and acts accordingly (e.g., calling her “he.”)

4. The Trans Woman reacts violently, angrily, etc. towards the source of her pain (e.g., the clerk who misgendered her, radical feminists).

The whole discussion in the GLBT Community over the issue of gender identity is fueled in large part by this loop.

Trans Women get their feelings hurt when others (reasonably) see them as Men, and they lash out. Is it an injury for a Man who thinks he’s a Woman (and thinks he passes really well as a “Woman”) to be “misgendered”? Yes, clearly, it is to Trans Women. Little did the clerk know what she was getting into by using her powers of observation!

Gender identity laws are relatively new. Watching how civil rights agencies and courts will process this disconnect between how the Trans Women sees herself and how Regular People see her will be fascinating to observe. Will courts and these enforcement agencies decide that the hurt feelings of Trans Women are “injury” subject to legal redress? Time will tell. I can only hope Trans Women adjust their expectations/demands on the rest of the World. However, given that the Trans Activist community has demonstrated its utter disregard for the biological reality (and vulnerability) of Women, I am not holding my breath.

← Transing The Dead
“A gentleman never asks, and a lady never tells” →