Part of Her Body #SayHerName 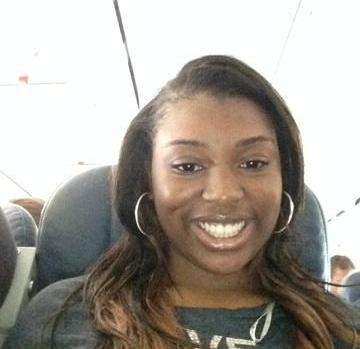 There is bad news everyday.

It is almost nonstop, really. Relentless. At some point, story after story after story about the Violence Men inflict on Women and Girls (and more often than not, erased by Passive “A Woman Was Killed” headlines), they all kind of blend together and become unseen.

I live in Baltimore. I have been here for 20 years. Baltimore has attracted national attention on the crime front over this time frame. The Wire. The “Riots” (says the White people, please never say the “Riots” to me). The bureaucratic incompetence that’s blamed for it. The local stories of violence blend together, too.

But then we have Arnesha Bowers.

Arnesha Bowers was a 16-year-old girl. She was a student at City College, a junior. She was much loved by her family and friends. What happened to Arnesha is what happens to beautiful, loved girls across the globe – Arnesha was raped by three people – two men and a teenage boy – who then killed her.

And then they set on fire a “part of her body to cover up evidence of sex assault.” 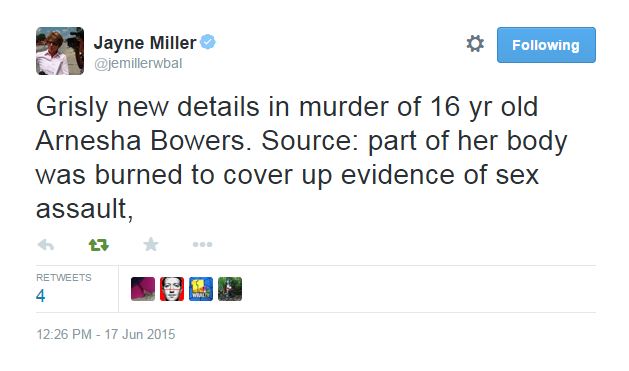 This story, the story of the men and teenage boy who raped, killed and burned a part of Arnesha’s body, is unfolding. It’s happening now. The men and the boy are in police custody.

I asked Jayne Miller to specify, to be direct; what part of her body did they burn to cover up evidence of their rape?

I don’t really need a response to that question; I know the answer.

Rapists (and here I am talking about men, because rape invariably is done by men to women, despite all the obfuscations the Third Wave likes to throw out on this front) have burned the genitalia of their victims before. This happened to LaVena Johnson. This happened to the woman raped by Ronnell Leberry. And the woman Michael Nunley raped. And so on, and I can’t go on, because I don’t want to *think* about this anymore, because I am tired of reading about the specific harm done to women and girls and to “parts of our bodies.” Tired isn’t the right word; I cannot *do this* anymore because it is adversely impacting my mental health.

We have gotten to the point now, in 2015, where women and girls are slotted as privileged because we are “cisgender.” That is, we are privileged because of parts of our body and the fact that we haven’t adopted a specific language for describing our dysphoria about our bodies.

The more “we” limit women’s language (and by “we,” I don’t include “me”), the more we make it impossible for us to describe the conditions of our confinement on this planet, across the globe. And limiting women’s language won’t end the unimaginable harm done to women and girls. It will only ensure that we will have nothing left to say.

I keep hoping for that “a ha” moment, that moment when the Third Wave Feminist organizations realize how they have painted Women into a corner with all these bubble wraps and safeguards on our language.

How many women and girls have to die *like this* before you connect the dots about WHO does WHAT TO WHOM?

This is a serious question.

← #BaltimoreUprising
The Erasure of Lesbians →