In my late twenties, my then-partner and I decided that we wanted to have children together.  For a number of reasons, I ended up having them. And by “having them,” I mean that we obtained sperm from a Male person and inserted it close to my cervix, resulting in – ta da – pregnancy and birth.

With the advent of Gender Theory in the GLBT Movement, this focus on the reproductive capacity of Females has been subsumed by the overwhelming emphasis on “Identity.”

How has this manifested, exactly?  We have seen, for example, the Cotton Ceiling, in which Lesbian sexuality is framed as somehow “bigoted” against trans women, because Lesbians – Females who are sexually and romantically attracted to other Females – do not desire sex or intimacy with Trans Women.

We’ve also seen prominent Trans Women – most notably Julia Serano and Jos Truitt – call on Females to stop talking about reproductive choice as a “women’s issue,” as such framing “excludes” Trans Women and Trans Men.  Jos Truitt has stated that calling reproductive health a “women’s issue” invisibilizes Trans Men and Gender Queer people.  Julia Serano has analogized women’s focus on reproductive autonomy to the struggle for marriage equality, which, in Serano’s view has “sucked all the oxygen out of queer activism over the last decade.”  These are Female-hating statements that make perfectly clear how unimportant Female reproductive health is to these prominent Trans Women.

What are Lesbians to make of this?  Like all Females, we are vulnerable to impregnation, and an assault on the right of women to have control over our own bodies impacts us.  In a year in which Virginia attempted to mandate that women seeking an abortion must undergo the degrading procedure of a transvaginal ultrasound probe before she can access abortion services, the boredom expressed by Serrano and Truitt with Female-focused activism strikes a sour note.

The obfuscation of the reality of Female reproductive vulnerability has at least one other effect: some Trans Men deny their ability to become pregnant and their need to have certain gynecological care because they are Female. 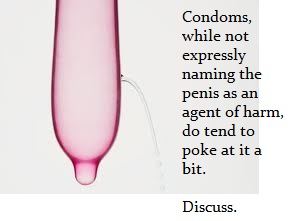 Trans Men need pap smears because they are Female. Trans Men need to use birth control if they engage in penetrative sex with a Male through their “bonus hole,” “cockpit,” “front hole” or “trannycave.”  And although some websites discuss the need for condoms during penetrative sex due to the risk of HIV and STD transmission, the risk of pregnancy is not always discussed.  One site – Queertransmen.org – notes that “(s)ome guys use the “pull out” method, removing the cock before ejaculation, in an effort to reduce their risk. Unfortunately, research shows that this can still lead to HIV infection, likely due to pre-cum.”  The site does not, however, bother to mention the other risk Females face from Penis-in-bonus hole sex – pregnancy (ta da)!

“Don’t worry baby, I’ll pull out.” – what year is this, 1950? An inglorious side effect of the replacement of Sex with Gender Identity is the denial of the real risk Trans Men face when engaging in sex with Males – pregnancy.

How is denying Trans Men access to information about  their reproductive health a good thing, a healthy thing, a necessary thing? Why is it that in order to minimize the “Gender Dysphoria” certain Trans People feel about their bodies, we have to deny biological reality?

Those of us who care about the class of humans known as Females are often accused of “biological determinism” or “biological essentialism.”  That is, these critics argue that acknowledging biological sex limits WHO YOU ARE and WHO YOU CAN BE.  Instead, these people disregard a material characteristic – sex – that has significant consequences (like pregnancy) and replace it with an ethereal characteristic – Gender Identity, all the while denying that they are, in fact, using this vaporous “Gender Identity” to DEFINE a person as “man” or “woman.”

This bait-and-switch has real life consequences for Females, including Trans Men.  These real life consequences come in the form of unexpected pregnancies of Trans Men. Failing to discuss our common experience as Females separates Lesbians and Trans Men from each other and denies our shared experience.  Trans Men and Lesbians are Female. Women’s health clinics should serve the gynecological needs of Trans Men, not because reproductive health is a “men’s issue,” but because it is a Female one.

← Hope for the Future
Now Ends The Summer of My Discontent →
Join 3,014 other subscribers