The ordeal of Ronald Gold

I grew up in the Age of the Closet. While I came out in college to some close friends, I was aware that perceptions of my identity needed to be carefully managed, if I was to have the career I sought. There must be no public declaration—and no open defense of the rights of “perverts.” To be sure, my contemporaries in the newly-formed Mattachine Society did just that, but some prudently hid under assumed names. Most of the leaders of Mattachine found that, except for the most menial posts, gainful employment was closed to them; the lucky ones were supported by their partners.

In 1969, with Stonewall, the gay and lesbian movement (not then styled LGBTQ) went into high gear. Because of the Vietnam War, the left was dominant then in ways that are hard to imagine now. And the left, especially the far left, has a long history of suppressing opinion not deemed “progressive.” “No free speech for fascists!” the Communist Party USA proclaimed. And their definition of fascist was a broad one. Some thought that I fit it. When I became active in the movement I learned that it was simply taboo to criticise certain causes, including radical feminism and Third World advocacy (what morphed into multiculturalism).

Of course I strayed from the narrow path of self-censorship. In due course the guardians of political correctness took their revenge, by successfully maneuvering to deprive me of my editorship of the Encyclopedia of Homosexuality.

In the 1990s I decided to respond by joining a “non-left” gay group, one that contained a number of influential members. called Beyond Queer Friends. There too ideological censorship was the rule, though the list of taboos was different. Anyone who did not subscribe to their program of imposing social conservatism by means of the panacea of gay marriage was ostracized. For this reason I eventually left the group.

One would think that, having experienced repression and denial of their right to free speech, gay men and lesbians would resolve to be different. Yet as I have indicated, the reverse has been the case.

Now I must sadly report an egregious instance. Bilerico is one of the leading GLBTQ sites on the Internet. Recently, the administrators of the site invited Ronald Gold to serve as a columnist. Gold, a veteran New York City gay activist who earned our respect for his selfless work in the years immediately following Stonewall, chose to write his first column on a controversial subject, the rationale regarding transgendered people. He apparently did not realize that this was a no-go zone. These individuals are the poster children of the current postmodernist phase of the LGBTQ movement (perhaps I should write lgbTq movement). At all events a fire storm ensued. Gold was immediately sacked, and the offending column was deleted from the site.

The column is now hard to find. For this reason I reproduce it below. I confess that I would not have used such words. However, the Voltairean imperative is to defend the free speech of all persons, including (especially) those with whom one disagrees.

Here is the offending piece:

“No” to the notion of transgender
by Ronald Gold

“What is transgender? Well, there are two sorts who seem to be covered
by the name, the drag kings and queens so good at portraying cartoon
imitations of straight people, and transsexuals, the folks who report
that from an early age they’ve felt themselves trapped in the wrong
bodies. Despite the equipment they were born with that belies their
assertions, they say they are really men or really women.

“What does it mean to be really a man or a woman? Since it’s not about
genitalia, it must be about personality, and what, one asks, is a male
or a female personality? Even straight people nowadays concede that
some men are the warm, loving type that used to be thought exclusive
to women, and some women are the strong, action-oriented sort that
used to be thought exclusive to men. And lesbians and gay men have
always known that people of the same gender can be very different from
each other. Isn’t it true that those we form mated relationships with
are always complementary – even polar opposites – to ourselves?

“Let me state it categorically. There is no such thing as a male or
female personality. Personality is not a function of gender.

“So where does that put the concept of transgender? In my view, down
the tubes! And that leaves the further questions of how transsexuals
got to think the way they do, and what to do to resolve their
dilemmas. I hope I’ll be forgiven for rejecting as just plain silly
the idea that some cosmic accident just turned these people into
changelings. What happened, more than likely, is that, from an early
age, when they discovered that their personalities didn’t jibe with
what little boys and girls are supposed to want and do and feel, they
just assumed they mustn’t be real little boys and girls.

“So, parents of such little boys and girls, do not take them to the
psychiatrist and treat them like they’re suffering from some sort of
illness. Explain to them that, whatever the other kids say, real
little girls do like to play with trucks and wear grimy jeans, and
real little boys like to prance around in dresses and play with dolls.
And make sure the teachers are on the same page.

“As for adults struggling with what to do about their feelings, I’d
tell them too to stay away from the psychiatrists – those prime
reinforcers of sex-role stereotypes – and remind them that whatever
they’re feeling, or feel like doing, it’s perfectly possible with the
bodies they’ve got. If a man wants to wear a dress or have long hair;
if a woman wants short hair and a three-piece suit; if people want
romance and sex with their own gender; who says they can’t violate
these perfectly arbitrary taboos? A short historical and
cross-cultural survey should establish that men and women have worn
and done all sorts of stuff. I recall reading something by Jan Morris
in which it seemed that he thought he needed a sex change because he
wanted men to hold doors open for him and kiss him goodbye at train
stations. For starters, I’d have told him that I’ve had these nice
things happen to me and I’ve still got my pecker.

“Perhaps it isn’t needless to say that a No to the notion of
transgender does not excuse discrimination against cross-dressers or
post-op transsexuals in employment, housing and public accommodation;
and I strongly support legislation that would forbid it. I would,
however, get after the doctors – the psychiatrists who use a phony
medical model to invent a disease that doesn’t exist, and the surgeons
who use such spurious diagnoses to mutilate the bodies of the deluded.”

I trust that no one will attribute these words to me, Wayne R. Dynes. Doubtless I will be attacked for reproducing, or even drawing attention to them. In the eyes of the current gatekeepers of the GLBT movement Ron Gold is now, and will always be a pariah.

This is shameful. Shame on you, people of Bilerico! 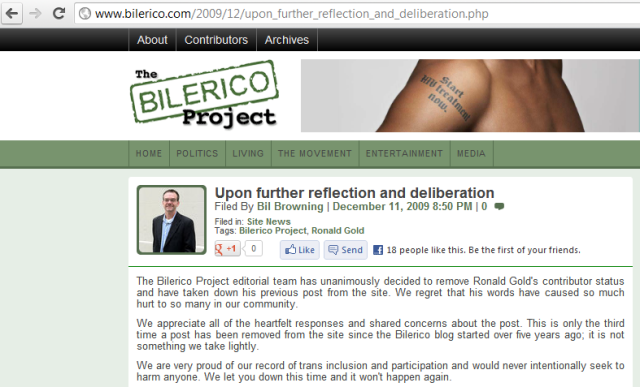 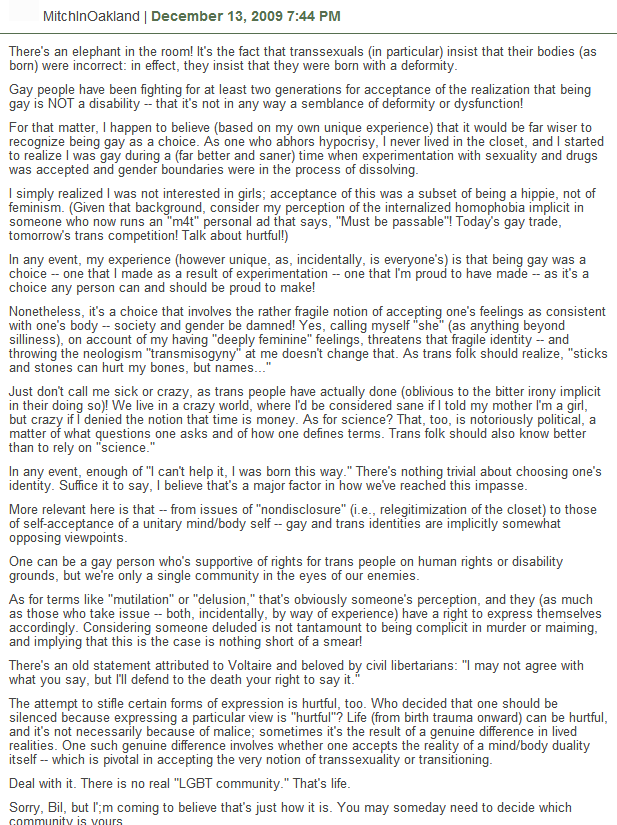 ← This is Why We Need Women-Only Space
London Radical Feminist Conference, July 2012 →