DOMA and the Reckoning

A few months ago, Huffington Post featured the story of Kathryn Lehman, a Republican lawyer who helped pass the 1996 law the Defense of Marriage Act (DOMA), which defines marriage as between one man and one woman. HuffPo heralded Lehman – who has now come out as a lesbian – for now lobbying to repeal the law.

HuffPo revised the history of 1996 and allowed Lehman to justify her DOMA support thusly:

“There was nobody married, it wasn’t allowed anywhere … (t)he view of gay people … it wasn’t Ellen [DeGeneres]. It wasn’t Neil Patrick Harris. It was kinky sex and women riding around on motorcycles without shirts on. That was sort of the view that the community projected as well.”

What, what? This is clearly false, as any lesbian with a pulse knows full well that K.D. Lang appeared on the cover of Vanity Fair with Cindy Crawford in 1993. I was 25 in 1996, and fully active in a gay community that went beyond “kinky sex” and shirtless dykes (both of which are awesome).

By 1996, the Baltimore City Circuit Court had been granting second-parent adoptions to gay couples for a few years, marking the beginning of the “Gay Family” movement in the state. Perhaps more importantly, the Baltimore Justice Campaign spearheaded efforts throughout the early to mid-1990s to amend Baltimore City’s law to extend domestic partnership recognition to city employees and their families. The measure failed at the time, but to say that gays and lesbians cowered in dark corners in shame is pure fiction sprung from the recesses of Lehman’s homophobic mind.

Republicans pushed DOMA to prevent the federal government from recognizing any marriage between gay couples and to ensure that states didn’t have to recognize gay couples legally married elsewhere. They pushed DOMA because they are bigots kick gays in order to advance their political agenda. Bill Clinton signed DOMA in a low-key manner, knowing even then that his act condemned gays and lesbians to a lifetime of future heartache. That’s because DOMA deprives gay couples of a whole host of rights, including medical leave pay for employees who leave to care for a partner, health care benefits and work/injury compensation, pension and educational benefits, and equal treatment in inheritance tax, joint income tax return filings, and spousal protections for long-term care under Medicaid. All told, DOMA deprives gay and lesbian couples of some 1,138 rights afforded by marriage recognition.

DOMA also deprives same-sex bi-national couples of the ability to acquire a green card for the non-U.S. citizen partner. This means that U.S. citizens cannot sponsor their partners for Legal Permanent Resident status, leading to citizenship. For the non-U.S. citizen forced to truck back and forth between the U.S. and their country of origin, the government can deny entry into the United States if it discovers the relationship – because, you know, such person might overstay their tourist visa.

With the real threat that the government can decide to keep bi-national couples separate if they speak publicly, is it any wonder that many in the gay and lesbian community had no idea that DOMA impacted immigration?

And that leads me to Inger and Philippa Knudson-Judd: 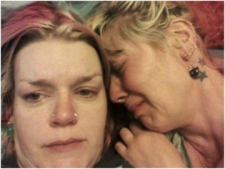 These women – legally married in Iowa and raising a child – cannot currently live together in the United States because of DOMA. Philippa, a citizen of the United Kingdom, must jet to and fro across the Atlantic to accommodate Kathryn Lehman’s 1996 homophobic wish for gay-free marriages. Please understand this – Philippa is forced to be apart from her wife and her child because of Kathryn Lehman’s work.

This is an abomination. This is not how things should be in the United States of America. Gays and lesbians, if we do not prioritize the safety and security of our families, no one else will. We need to take action to ensure DOMA’s repeal, but we can take steps now to bring couples like Philippa and Inger that much closer to being at home together. For example, President Obama – the first sitting U.S. president to support marriage equality – could direct the Department of Homeland Security, Immigration, and Customs Enforcement to revise its prosecutorial discretion policy to include specific reference to spouses and partners of lesbian and gay American citizens and to cease all DOMA deportation cases against the spouses of U.S. citizens.

I know of at least one lesbian Republican lawyer who better make damn sure she is doing her level best to bring these couples together, but to be on the safe side, best we all do it too.